While it became obvious to most people living by coral reefs, it was only when one of the world’s leading marine scientists proved it, that the world sat up and realised that sunscreens kill coral. 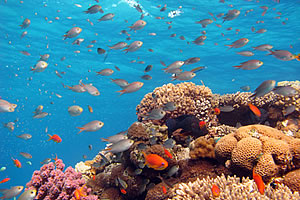 Since then many resorts that depend on coral for their tourism have banned standard sunscreens in favour or biodegradable ones. Unfortunately this is not yet going far enough.

Biodegradable products break down or dissolve in the environment. They decompose or dilute. This in itself means that they still do harm unless their ingredients have been significantly altered and tested.

In fact, sunscreens that are described as biodegradable mostly all still do serious damage to the aquatic environment.

What happens is that the molecules in these products trigger certain viruses which kill the coral or clam. Though these virures all already present in these organisms, they are normally left un-triggered.

So, while many biodegradable sunscreen producers base their harmless claims on dilution, this is both logically and in fact scientifically not true. The virus-triggering molecules still each individually do harm, however distantly they may have become separated from their original sunscreen mates.

Now, these biodegradable products often contain sun filters that are also now questionable in what they do to your skin. What is bad for coral, is probably also bad for your skin.

So if you reach for a biodegradable sunscreen, remember it is probably not ecocompatible.

Ecocompatible sunscreens, the best scientific ones at least, have ingredients which have been individually tested on coral and been proven to leave the coral completely untouched and unharmed. All the ingredients together, in their final combined state, have then been tested again to ensure that there is no adverse reaction by the combined ingredients on the coral.

When you buy an ecocompatible sunscreen, make sure it has some sort of scientific validation or certification by a reputable university and/or water organisation.